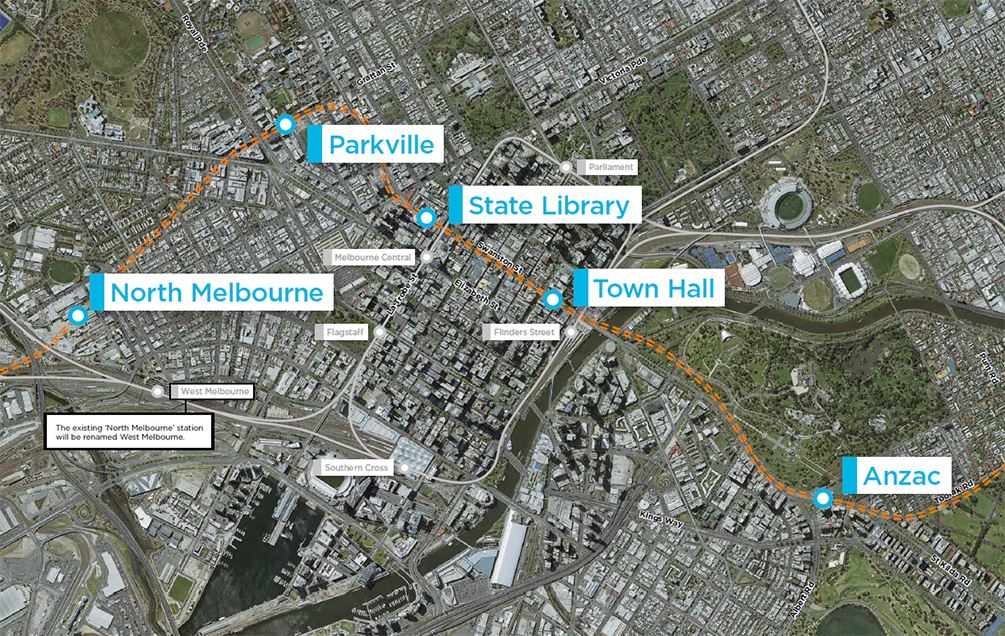 The names of the five stations for the $11 billion Metro Tunnel project were revealed on Wednesday after a public vote, and transport users who felt the names should tell people where they are should be very happy.

The new stations were initially to be known as Parkville, Arden, CBD South, CBD North and Domain.

Parkville will stay the same, but CBD South becomes Town Hall, CBD North becomes the State Library and Domain, near the Shrine of Remembrance, will be fittingly called Anzac station.

There were more than 50,000 entires submitted over eight weeks after the public was asked in August to come up with names for the five new stops.

Richmond fans had lobbied for Dustin Martin to have a station named after him while Victoria’s first female premier, Joan Kirner, who died in 2015, had support for her own station name.

Australia’s first female prime minister, Julia Gillard, also drew many nominations, but Victoria’s naming rules state that places should not be named after people who are still alive.

There were plenty of tongue-in-cheek submissions too, including Vegemite and Shane Warne, and the Game of Thrones-inspired Winterfell, Stark and Tully.

More than 200 people from 50 countries, including the US, Iran, Myanmar and Colombia, had participated in the public process.

But the government appointed a judging panel, with representatives of Aboriginal Victoria, Public Transport Users Association, Museums Victoria and the Youth Affairs Council, to stop the vote from being hijacked.

`”There were many humorous and interesting suggestions made by members of the Victorian community, it seems that Game of Thrones was more popular than we thought,” the Premier said.

“Station McStationface is probably not a great name for a station, but many people didn’t necessarily agree with me.

“But at the same time we have to remember that this is about how people move through the city, not just locals but tourists.

“There are also some considerations around emergency services being able to clearly understand where they need to go and how to best get there.

“People need to be able to find where they’re going, make the connection between big landmarks and these stations and that’s why this common sense approach is the best way to go.”

There were calls to give the station Indigenous names.

But the Premier said there would be further opportunities in the naming of forecourts and new spaces created for the project, “for us to look at naming and appropriate recognition in a broader context”.

Daniel Bowen from the Public Transport Users Association went some way to explaining why the name Anzac station was chosen over other options, claiming the Shrine trustees were opposed to calling it “Shrine”.

The Shrine of Remembrance confirmed that its trustees felt there was already one Shrine and it was not appropriate to give a train station the same name.

Overall, initial reaction to the station names appears to be largely positive, though some public transport users thought it could be confusing to rename North Melbourne as West Melbourne while using the North Melbourne name for Arden.

The State Library station’s northern entrance is also a block north of the library, near the City Baths, which may cause further confusion.