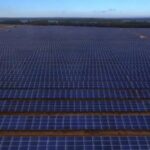 One council alone has approved one wind and 11 solar projects worth $6 billion.

“We’ve got $1.2 billion of that under construction now, and that’s the exciting thing, this isn’t just about approvals, this is about action to deliver renewable energies to this region,” Western Downs Regional Council mayor Paul McVeigh said.

“And we know there are another three [solar farms] in the pipeline.”

When the coal seam gas industry scaled back, hundreds of jobs were lost, rental vacancies soared, and businesses failed.

But Mayor McVeigh says the signs of economic recovery are becoming increasingly visible.

“We have growth in all our towns, and one of the real estate agents in Dalby has only got two houses left to rent,” he said.

“One job in our small towns is really valuable, eight jobs is fantastic. This is bringing hundreds of jobs.”

It will generate enough electricity to power 30,000 homes.

When it is finished, the workforce of over 100 will move onto a bigger APA project, with 800,000 solar panels.

“We’re looking at the Beelbee solar farm which is just nearby, and if we get all the approvals we want for that and proceed, that will be around $200 to 300 million as well,” APA’s Sam Pierce said.

“Darling Downs has got all three of those, so that’s three big ticks in its favour.”

The large amount of development in the pipeline has gone largely uncriticised to date.

In Chinchilla though, two families who will overlook a 300-hectare solar farm for 25 years are angry local government planning rules mean they are unable to lodge an objection.

“You can have a quarter-of-a-billion-dollar power plant going in beside your house and no recourse to be able say this isn’t quite right,” watermelon grower Terry O’Leary said.

“As long as it meets their planning code they are powerless to stop it, too.”

Mr O’Leary says he and his parents fear their land will be devalued, and are worried about living next door to what he says is an industrial power plant.

He claims if the proposal was in New South Wales the approval decision would not be in council hands.

“Anything over $30 million goes to State Significant Development (SSD) and it would not be allowed to be built on class A or B agricultural land.”

He says the land is good quality grazing country, and should be quarantined from renewable development.

The owner of the land in question is Ian Beard — who runs beef cattle and sheep and grows watermelons.

“I’m an advocate that prime agricultural land should not be used, or irrigation land, there is no way in the world we would allow it to happen on our horticultural land here.”

He has been surprised and saddened about the negative publicity from one of his neighbours.

“There is no dust, no pollution, no noise, and in this particular situation no aesthetic problems, we have not got this beautiful valley where we are wrecking anyone’s view, there is just no way in the world we are going to devalue the land.

“I believe anyone driving up that road who doesn’t know it’s there won’t even see it. We just can’t see any negatives at all.”

Mr Beard says it is just luck his place was selected, his land is flat, large enough, close to high voltage power lines which run through his farm, and close to the town of Chinchilla.

“I have neighbours who say ‘can I get the contacts as maybe they want to extend into my place.’

“There are plenty of landholders who will be willing to be part of it.”

Could Toowoomba have the world’s biggest solar farm?

The Toowoomba Council hasn’t missed out on the boom.

It approved a billion-dollar project at Bulli Creek which, if it goes ahead, will be the biggest in the world.

The land was chosen because it is flat and near a substation, but it is also good cropping country.

Mayor Antonio says he understands the public and farm lobby group’s concern about good farm land being sold or leased for solar farms.

“I guess we have to be a bit cautious of the type of land we put it on, but in saying that, the land is restorable, its not going to be destroyed in any mining effort or anything like that, and in 20, 30, 40 years’ time that land will be back to full production.”

In Warwick, the Southern Downs Regional Council faced community opposition to a solar farm proposal on good agricultural land on the edge of town.

“This region is about growth and development and we can sit here and go poor slowly or we can progress our region and the more development we can get in our region the more jobs,” Ms Dobie said.

“The more progress we can make, the better off we are.”

The site is in a valley which is overlooked by houses.

Local resident Mark Pierce says residents bought because of the rural views and they fear the value of their properties will fall when the solar farm is finished at the end of next year.

“I believe everyone has a right to do what they want on their land, but we also have laws, and I can’t just do something here that would drastically affect my neighbour,” Mr Pierce said.

When fully operational in 2019 the 154,000-megawatt operation will more than cover UQ’s $22 million annual electricity bill, making it the first university in the world to offset 100 per cent of its electricity use.

Mayor Dobie says the addition of a solar energy research centre is a coup for the shire.

“It will be the exemplar of what a solar farm should be,” Mayor Dobie said.

“This is a turning point in our region to show we are moving forward, that we are looking to the future, and there is nothing more evident than that than renewable energy.

“There’s a buzz about the Darling Downs, this is a great place to be and great time to be here.”

“Absolutely they are the voice of the local community, and we are seeing local government in north Queensland saying ‘no this is wrong we do not want a solar farm there’, and I totally respect it.

“[Meanwhile] we see other local governments in southern areas of Queensland say ‘no we want a solar farm there despite the objections of the community’, that is a matter for them.

“People have a lot of power when it comes to local government complaints through to the planning and environment court … but also ultimately there is the ballot box.”

Toowoomba Mayor Paul Antonio says he and fellow mayors are stunned by the scale of the projects, how quickly they can be built, and the economic activity renewable energy has brought to the region.