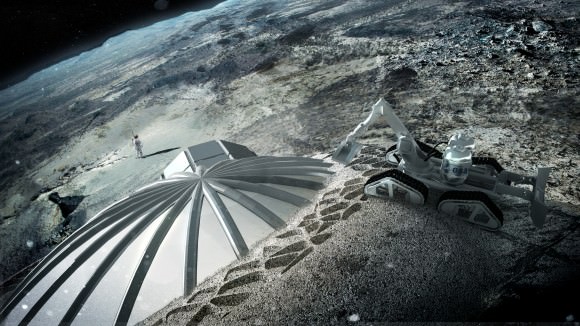 Despite the hostile environment for people and machines alike, scientists are on track to make 3D printed structures on the moon a reality.

The last time the United States sent astronauts to the moon was in 1972 (pictured above) in a mission to collect samples, deploy scientific instruments and learn more about volcanic activity. Fast-forward 50 years, and humanity has set its sights on a loftier goal — permanent settlements on the moon, and perhaps even Mars.

When the International Space Station first underwent construction in 1998, permanent structures built on the moon were viewed as something for the distant future. But today, some experts say despite the challenges in cost and environment, this vision may be close to realization.

The key to creating permanent structures on the moon or Mars is utilizing the material already found there, according to experts. It’s cost prohibitive for companies to bring building materials to space, as space launches themselves can cost $81 million per astronaut, according to Fox Business.

The moon is also an inhospitable place. Aside from the lack of oxygen and low gravity, there are a plethora of problems that builders will have to contend with.

“You’re operating in a vacuum environment, you’re operating in a place that has extreme temperatures, hot and cold, and extreme temperature gradients that cause a lot of problems for structures and equipment,” said Raymond ‘Corky’ Clinton, the leader of NASA’s Moon-to-Mars Planetary Autonomous Construction Technology project, which is working with companies such as Austin, Texas-based construction technology firm Icon to bring permanent structures to outer space.

Part of the problem is also lunar regolith, or moon dust, which is made up of ultra-tiny grains that form as a result of meteorite impacts on the moon’s surface, breaking up over and over again over the course of millions of years, according to NASA.

The resulting dust can travel at hurricane-like speeds, and it’s also razor sharp. It sticks to the suits of astronauts, along with spacecraft, and due to the dust’s electrical charge, enough of them packed on to a rocket can destroy the ship’s electronics.