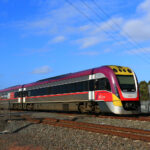 Works on the 109-kilometre section included conversion of the line from broad gauge to standard gauge, sleeper replacement and track maintenance.

Freight trains from Murrayville will be able to connect with the recently upgraded and reopened Mildura line, a major freight route that plays a key role in transporting the Murray Basin region’s renowned grain, mineral sands, fruit, vegetables and wine to the world via export markets.

Speeds on the Maryborough to Ararat rail line will be raised in the coming days following the upgrade of 21 level crossings, which now feature boom gates, bells and flashing lights to boost safety for local road users and freight train drivers.

This stage has delivered significant upgrades to our rail freight network and will improve rail links from Victoria’s north west to our major ports in Portland, Geelong and Melbourne.

V/Line has also implemented a Manual Train Order system on the Maryborough to Ararat Line to allow a significant increase in the number of train movements on the line for trains going in the same direction.

Industry representatives will meet with Freight Victoria, V/Line and Rail Projects Victoria tomorrow to discuss the Victorian Freight Plan, rail freight operations, and an update on the status of rail freight projects.

The update will include the confirmation of a late 2020 target delivery timeframe for the completion of the Murray Basin Rail Project and the Freight-Passenger Rail Separation Project.

Rail Projects Victoria will provide regular updates to industry on works being undertaken to ensure effective delivery of both projects.

“The upcoming completion of the Murrayville to Ouyen line upgrade is a major milestone for the Murray Basin Rail Project. “

“These works will be complemented by the remaining stages of the project, which we’re working closely with industry to deliver.”

“We’re listening to industry and will work alongside them over the coming months – taking into account the feedback we have received.”