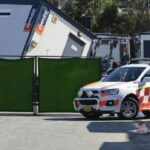 A man has been crushed to death by a portable building that fell on him at an industrial site near Newcastle.

The incident took place at the Newcastle branch of equipment rental business Onsite Rental Group, where a portable building appeared to have tipped almost wholly on to its side.

On Wednesday police confirmed the man was a 55-year-old subcontractor, believed to have been from Bonnells Bay in the Lake Macquarie area.

Emergency services were called to the Thornton Industrial Estate work site about 8.15am on Wednesday, following reports of a workplace accident.

Officers were preparing a brief for the coroner.

A SafeWork NSW spokesman said the incident on Huntingdale Drive, Thornton was being investigated.

“Initial inquiries indicate the 55-year-old male truck driver was unloading a portable amenities block from a truck when he was struck by the load and suffered fatal crush injuries,” he said.

In a statement, Onsite said the victim was a contractor working at the Newcastle branch.​

“Our thoughts and sympathies are with the family, friends and colleagues of the deceased. The precise details of the circumstances leading to this tragic incident are not yet known,” Onsite chief executive Mike Foureur said.

“Work health and safety at our sites is our number one priority. We will assist and cooperate with all relevant authorities in their investigations and are doing everything possible to support the family and other employees affected by this tragedy.”​

On its website, Onsite describes itself as “a specialist B2B equipment rental business delivering superior hire experiences and performance to many of Australia’s largest mining, construction, industrial, oil and gas, infrastructure, government and event organisations.”