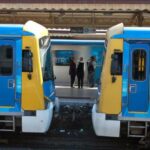 Under the plan, eight kilometres of single track between Dandenong and Cranbourne would be duplicated to address the “bottleneck” on the line, Public Transport Minister Jacinta Allan said.

She said it was the longest single section of track on Melbourne’s metropolitan train network.

“The problem is with the single track it causes congestion, it causes delays, it means you can’t run more services,” Ms Allan said.

“If one train is delayed even for one minute the whole network, the whole system, finishes up disrupted,” Premier Daniel Andrews said.

Services would be able to run every 10 minutes in the morning and evening peaks under the plan, with construction creating 1,000 jobs starting in 2019.

Ms Allan said it was a “big job” to do the work while the train line was still running.

“But we know that it’s such an important project to enable more services, a doubling indeed of services in the peak period, for the growing Cranbourne corridor,” she said.

While that line is being duplicated, the Government will finish planning to extend the line to Clyde, a plan already outlined by the Coalition.

It has promised to spend $487 million upgrading and extending the train line from Cranbourne to Clyde and building two new stations at Cranbourne East and Clyde.

The Opposition has pledged to upgrade the single stretch of track as the second part of that project.

But Ms Allan maintained the track duplication must come first and that the Coalition plan was “underfunded and undercooked”.

Tracks will also be updated around Caulfield and Dandenong stations where the lines split off to help move more trains more quickly through the stations.

Up to the public to decide: Opposition

“It’s up to the public for their decision.”

Meanwhile, the Coalition announced that it would get tougher on domestic violence perpetrators if it wins the November election, making it a specific offence to non-fatally strangle, choke or suffocate a family member.

The offences would be punishable by up to 10 years in jail and would be subject to a minimum mandatory sentence.

“To have those domestic violence settings where strangulation and choking takes place is utterly unacceptable and we will ensure that the law is changed … to make sure that there is a punishment that fits this crime,” Mr Guy said.

Annette Gillespie from the domestic violence helpline Safe Steps said 15 per cent of its callers last year said they had been strangled by a family member at some point.

“We know that for those women it means they are eight times more likely to experience serious harm or death after the strangulation event,” Ms Gillespie said.