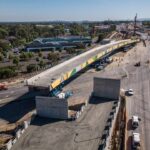 Let’s stop for a moment and appreciate what the Darlington Upgrade Project achieved over the weekend. We still can’t get over it.

The first of two 3000-tonne bridges was moved into position over the weekend on the Darlington Upgrade Project in an Australian-first for a civil construction project of this scale.

Over the past four months, the 180-metre long bridge has been constructed on land between the Southern Expressway and Main South Road, near Marion Road.

The bridge was transported and manoeuvred into place using ‘self-propelled modular transporters’, similar to remote controlled trailers, which travelled at approximately 100-metres an hour.

If the bridge was constructed in its final position, at least seven closures of the Southern Expressway and Main South Road would have been required. This was reduced to a single closure this weekend for the bridge to be moved into position.

The bridge is one of two being built using this construction method, each longer than Adelaide Oval.

The installation of this bridge will deliver northbound Main South Road traffic over the Southern Expressway and onto local surface roads.

A second bridge is being built using the same method and will be installed next year. It will deliver northbound Main South Road traffic over the Southern Expressway to the 3.3 kilometre non-stop lowered motorway.

In total, eight bridges will be built for the Darlington Upgrade Project including:

The team at Construction Advisor still can’t get over this bridge.